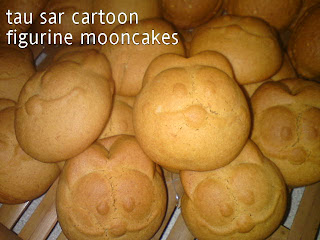 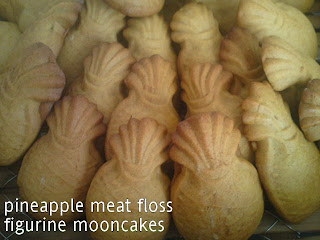 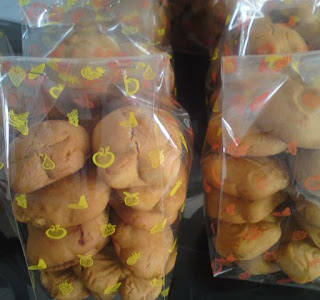 I made this figurine mooncake with red bean paste and meat floss filling by popular requests from my nephews.  Personally, I prefer plain 'koong chye pneang' [recipe here] and for those with other fillings [please recipe here].  But you can also use this recipe for plain mooncake if you intend to make more, just omit the red bean paste and meat floss.
This recipe here uses more golden syrup and oil compared to the recipe for Sesame Seed Figurine Mooncake [recipe here].  The dough is softer but more oily to the touch. 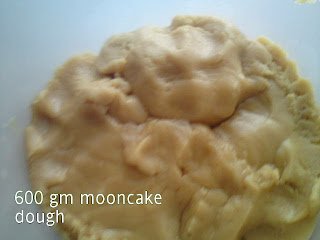 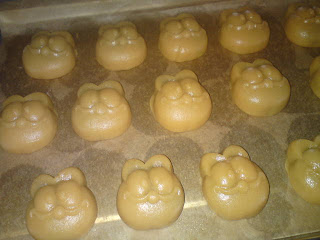 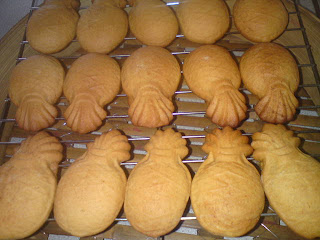 Very cute especially the Garfield ones. You make a lot of mooncakes. Can send some over? hah! hah!

Hi Phong Hong, my mooncakes are for giveaways to my mum, MIL and some neighbours who don't bake their own. Move over here, I pass some to you, hahaha.

Hi Vivian, in the 60s, 70s the 4 pc mooncake pack also comes with a packet of 'koong chye paeng'. Nowadays, commercial outlets no longer promote this packaging cos' I believe the big mooncakes make more profit.

where can I buy the fish and pineapple shaped mould??