Weekend meals - I just love easy cooking and prepare simple food for my family.  We 'cooks' do need a rest to 'charge' ourselves too, after we are all humans like the rest,  hahaha!   All work and no play makes Jane a dull girl. 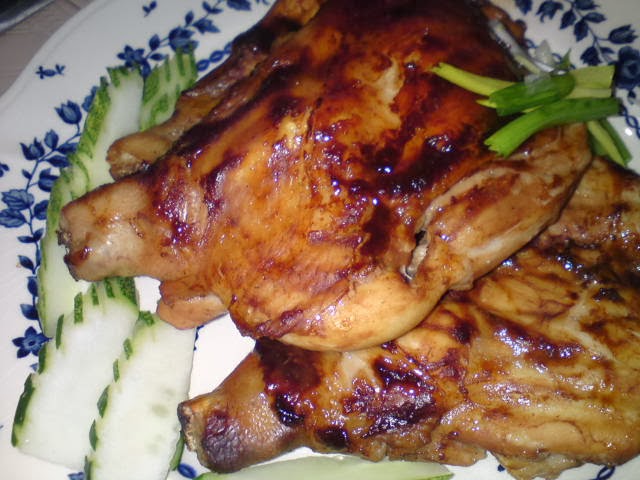 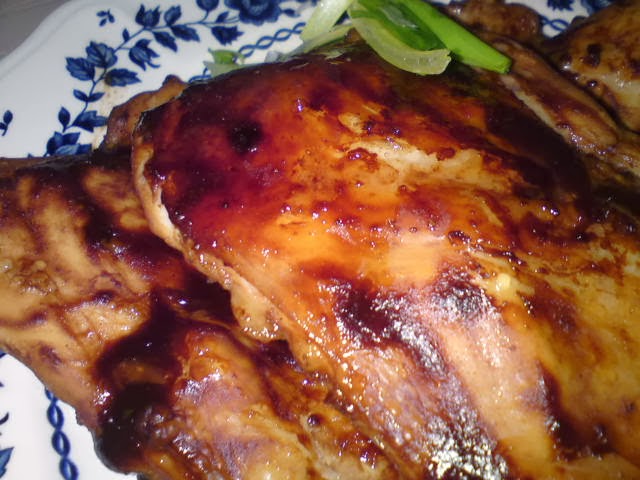 This recipe was inspired by Redneck's Hoisin Chicken [here] which is roasting a whole chicken but I prefer roasting drumsticks or chicken chop [deboned chicken whole legs] as one whole chicken is too much for 3 persons.
This roast chicken is served with a tasty hoisin onion dipping sauce, steaming hot rice and some sliced cucumbers. 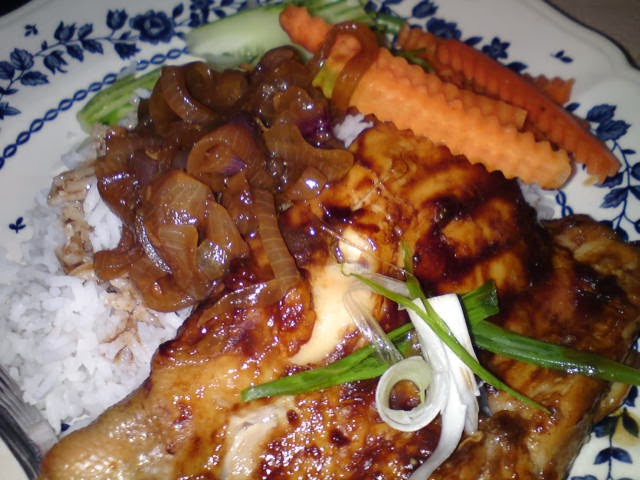 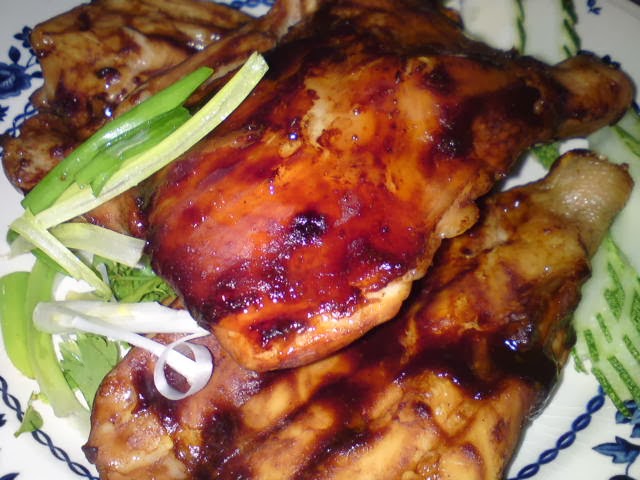 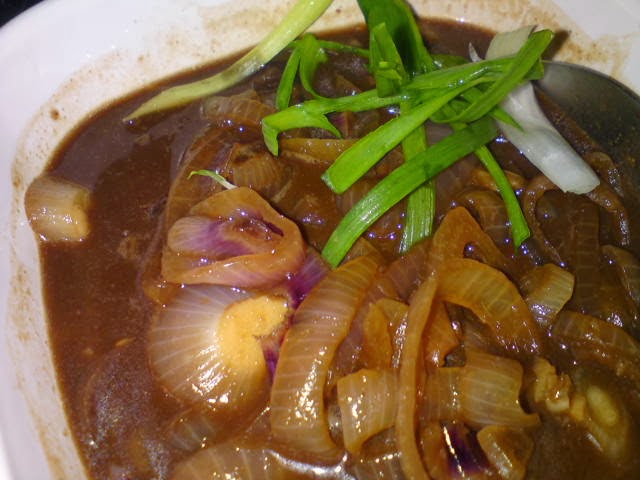 Again, another meal better to be served in my cosy little kitchen than eating out.  I think my hubby will like it, hehehe!  More economical of course [almost everyday I hear people [from sellers to buyers] complaining about rising costs of food.
Food verdict - my hubby says it's very aromatic, tasty and surprised when I told him, it's just Hoisin sauce, salt and honey.
Ingredients
[serves 3]
3 pieces chicken whole leg - deboned [either with or without skin]
- marinate with 1 tbsp Hoisin sauce and 1 tsp salt for at least an hour [mine is overnight]
Before roasting - rub over the skin and meat with:
1 tbsp each of honey and Hoisin sauce 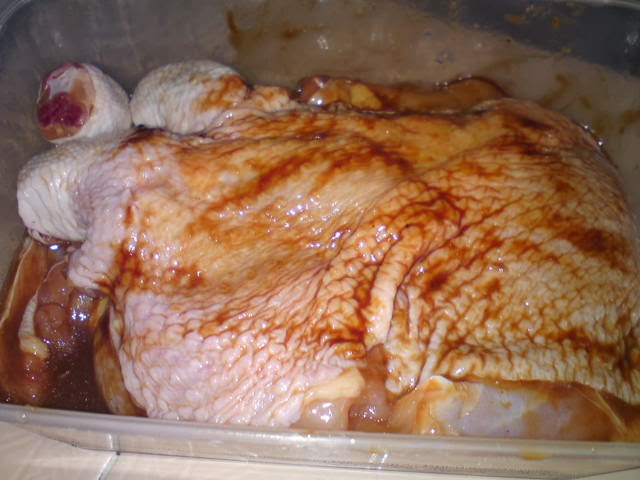 I have bookmarked this kuih recipe from Happy Flour for sometime.  Really easy to prepare, good as dessert or snack for parties and gatherings.  These kuihs are soft yet chewy and tasty.   Moreover, they look attractive in various colours. 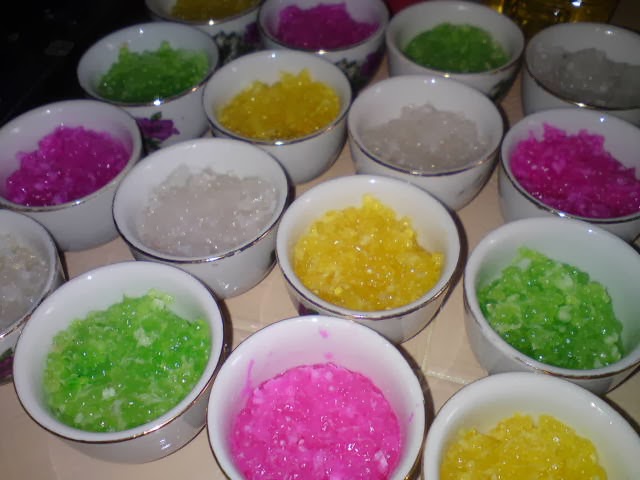 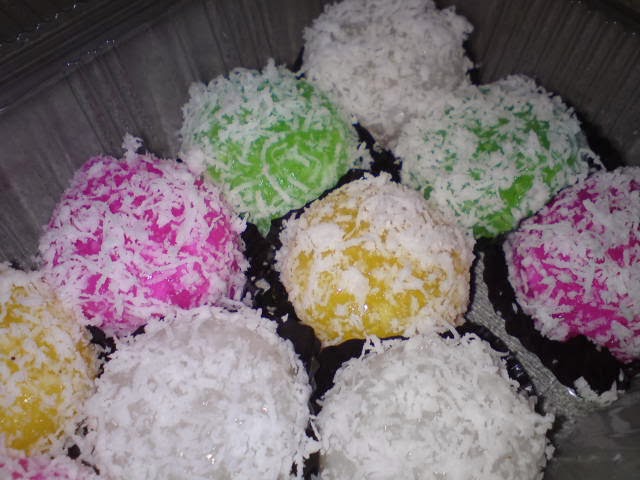 I have to change the quantity for the ingredients used because this is the minimal quantity the vendors would sell.  Next round shouldn't be a problem as I'll make more especially if these are for gatherings.
The kuihs together with the mini purple Angku Kuihs [see this post] were prepared for a gathering.   They were so nice that several ladies approached me to ask whether I made them or are they from the stores. 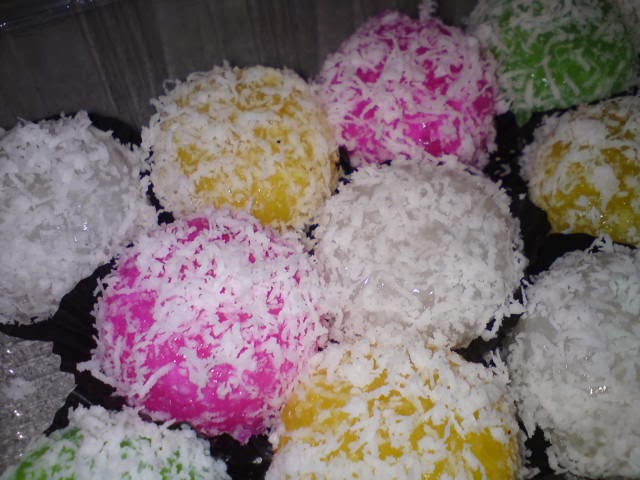 This is a second recipe which I used to make more purple sweet potato angku kuihs for a family gathering at a health centre.  About 100 senior citizens  and their family members will be there each month for the food, fun and singing.  Usually it is potluck style and there are always ample food shared.  With a wide choice of food, I thought it would be good idea to make small cute little angku kuihs so that more people would try it since it is only one bite size piece and won't be too filling. 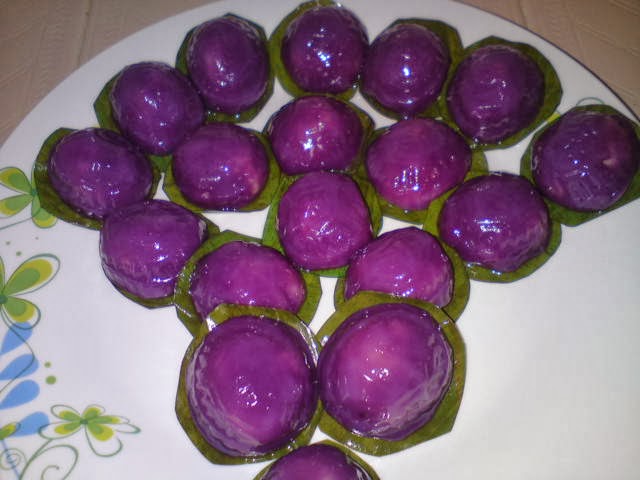 Many of them were tempted to try these little angku kuihs which weren't enough for the crowd as this recipe only makes about 50 pieces.

For this recipe, the ratio of sweet potato to glutinous rice flour is more than my first recipe [Purple Sweet Potato Angku Kuih#1].  The difference is the colour tone, it is a more vibrant purple colour than the first one which uses less sweet potato with the portion of glutinous rice flour.  Taste and texture is about the same as I used the same method.  However, I'm not too pleased with the print which is not distinct probably because of the mould and the angku skin in thin.
Another point which I would like to share here is - Angku kuihs using sweet potatoes don't keep long.  They stay soft for 2-3 days but by the second day, the kuihs aren't that fresh and the colour does change a little.  This fact was confirmed by a very experienced Angku kuih seller who has been making this kuih for several decades.  She prefers to use colouring if she intends to keep the kuihs for longer time.  She doesn't use preservatives.  I think the weather does affect too.  During this hot spell, it is better to finish eating the kuihs asap. 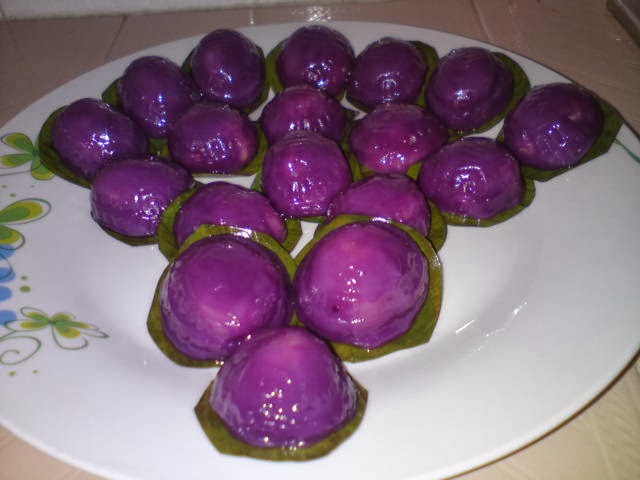 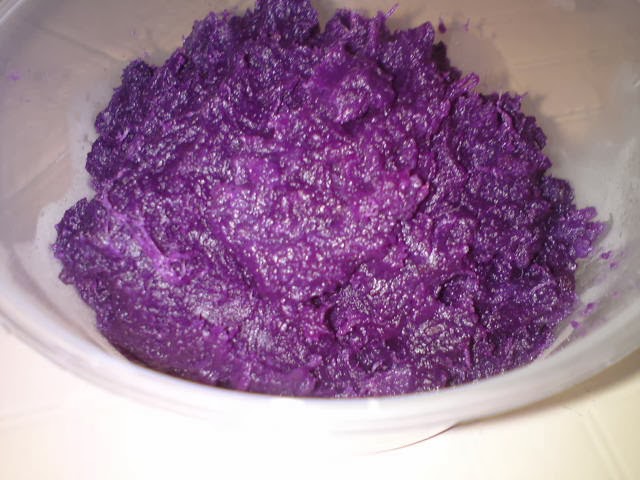 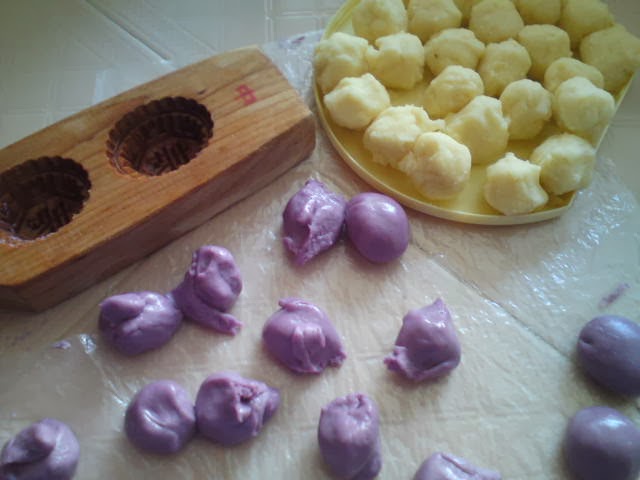 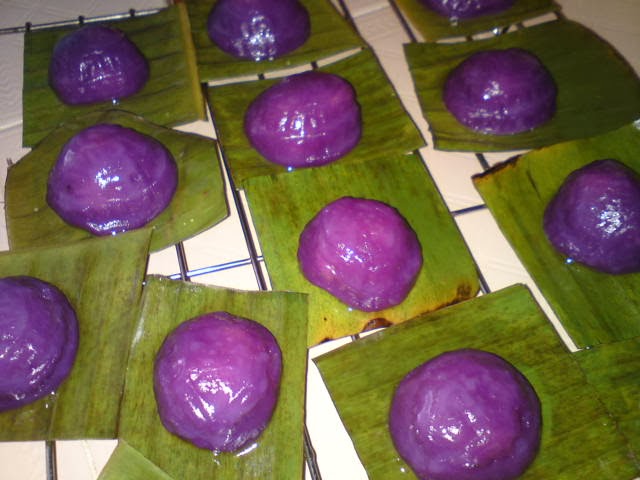 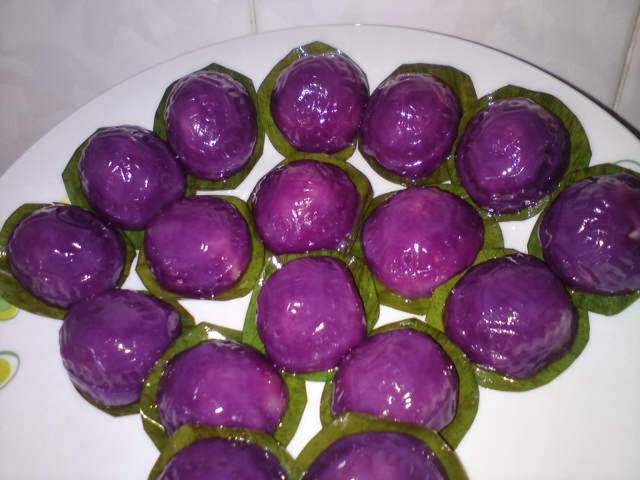 I made some Angku Kuih following Happy Flour's recipe Purple Sweet Potato Angku Kuih.  The angku kuih skin was not that difficult to make as I used the mixer with paddle hook to do the kneading.  The dough was easy to handle compared to using hand to knead [my next post] where the dough is very sticky as it uses boiling hot water. 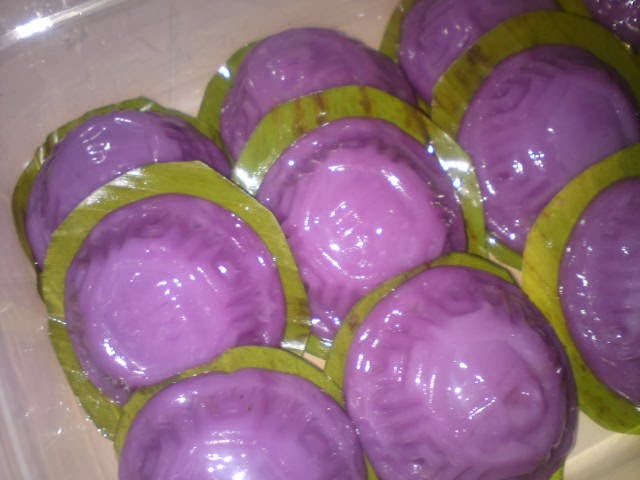 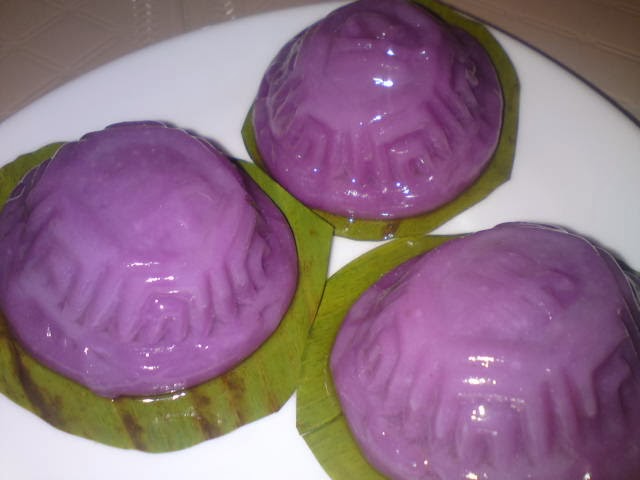 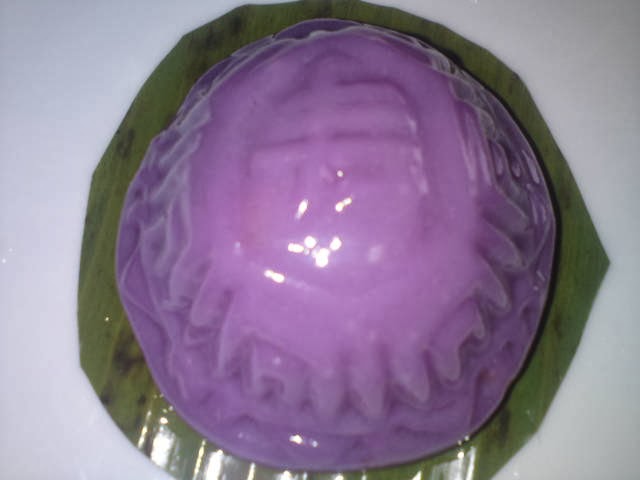 For the mung bean filling, I modified slightly on the sugar and oil as I find the filling a bit on the dry side.  The paste is not sweet at all. 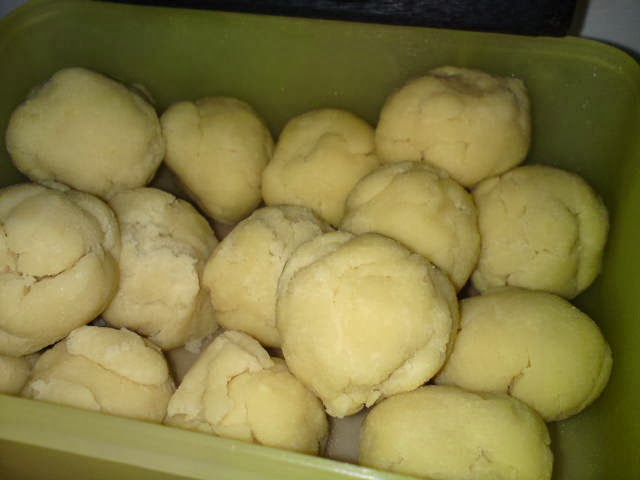 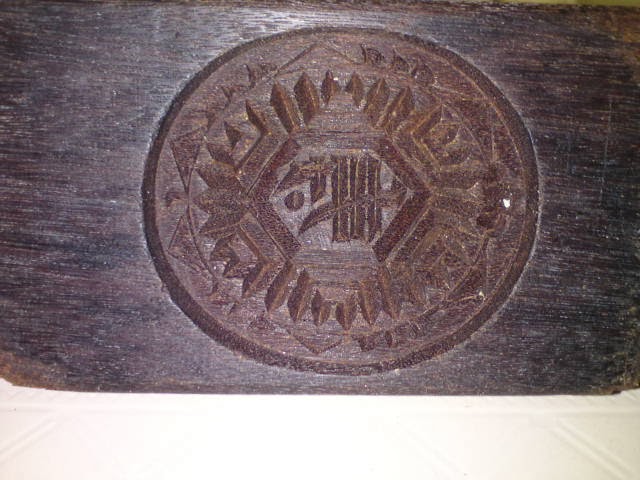 The angku kuihs stay soft and chewy for 2-3 days.   During hot season, it is advisable to finish eating these kuihs as soon as possible as they won't keep long. 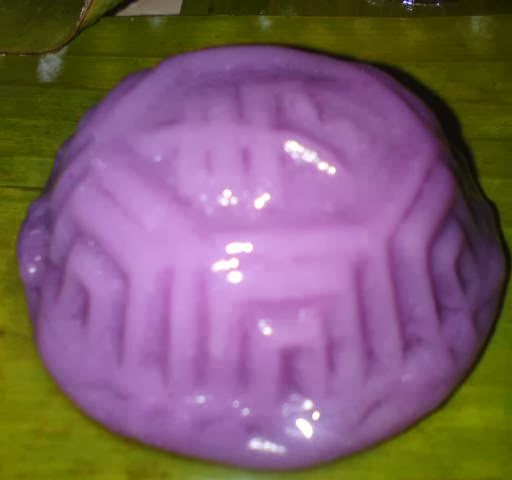 This chicken dish looks very appetising and easy to prepare in a local food magazine.  Since the weather is getting quite unbearable, cooking a simple dish is best solution instead of 'sweating' in the kitchen with numerous dishes.  I served this dish with EZ Boiled Cubed Potatoes and another simple mixed vegetable salad [see this post].  All these make a yummy weekend meal at home, still better than 'dressing up' and eating outside....hehehe! 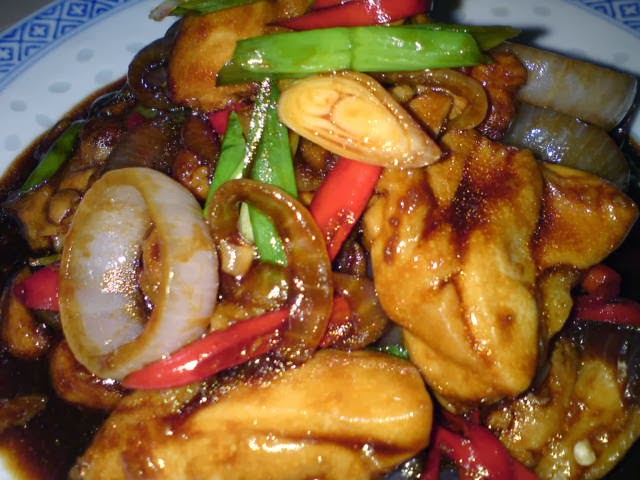 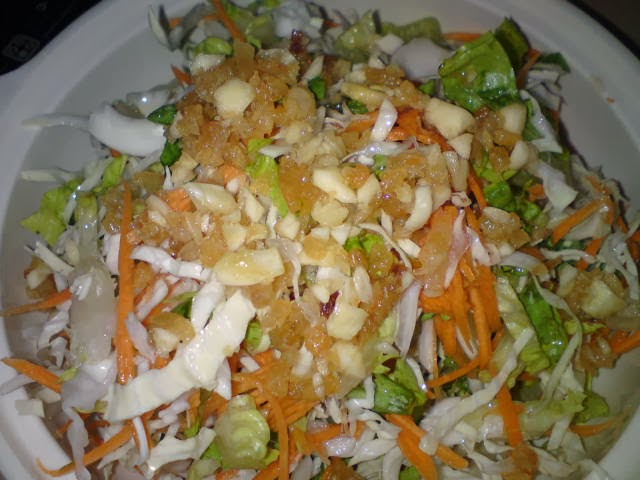 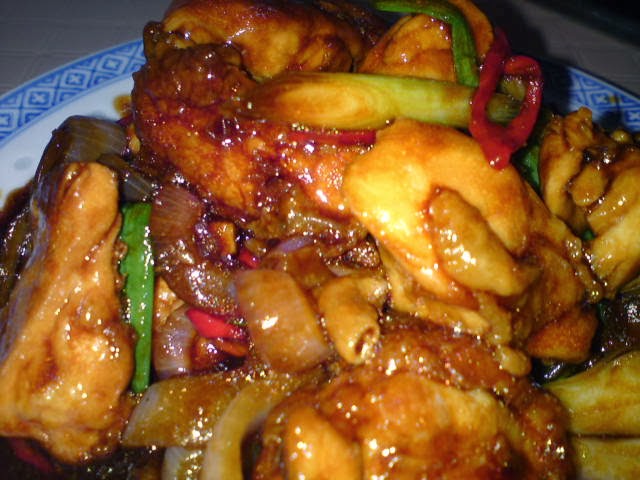 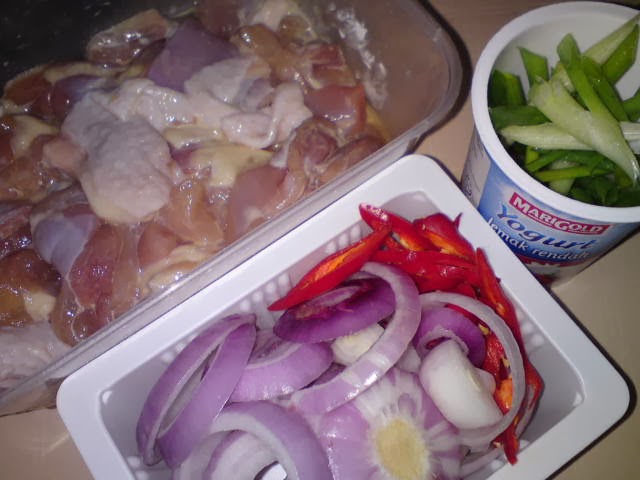 Notes: Visit this site For Its' Nutritional Facts [here]
I'm submitting this post to Cook Your Books #9 Event hosted by Joyce of  Kitchen Flavours 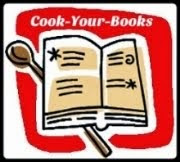