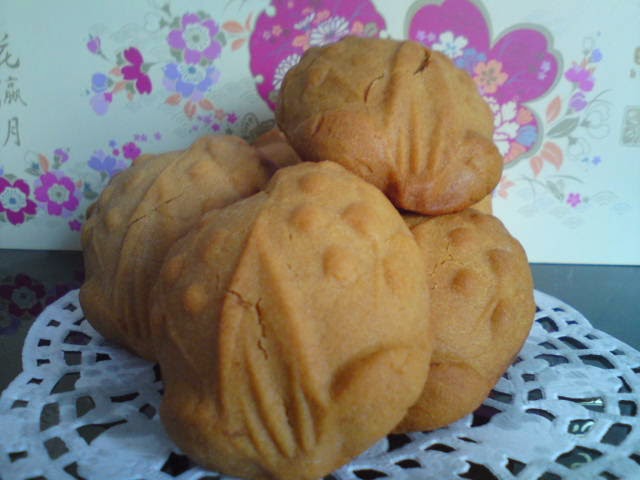 This is a lovely Gongzai Biscuit shared by Aunty Young which was adapted from Joceline Lor that attracted my attention.  The dough has lotus seed paste added to it. 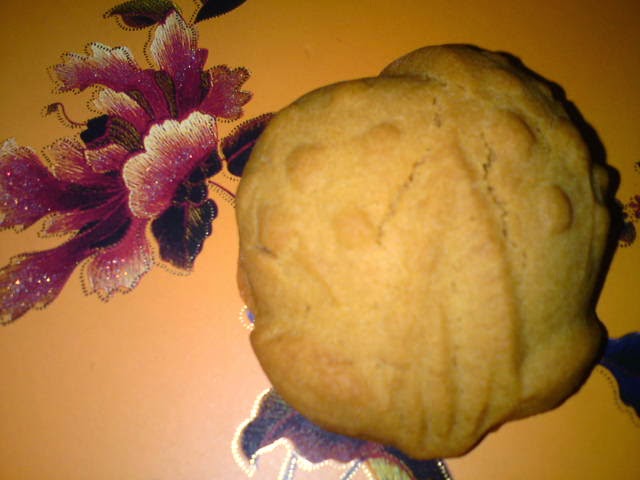 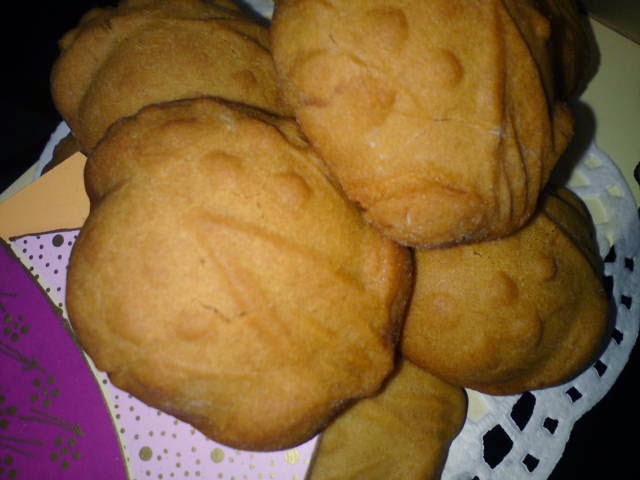 Out of curiosity, I made some and found the dough very easy to handle, soft and smooth.  For this dough recipe, I only managed to make 30 with the peach shape mould that I used.  I made this vegetarian that is without applying egg glaze. 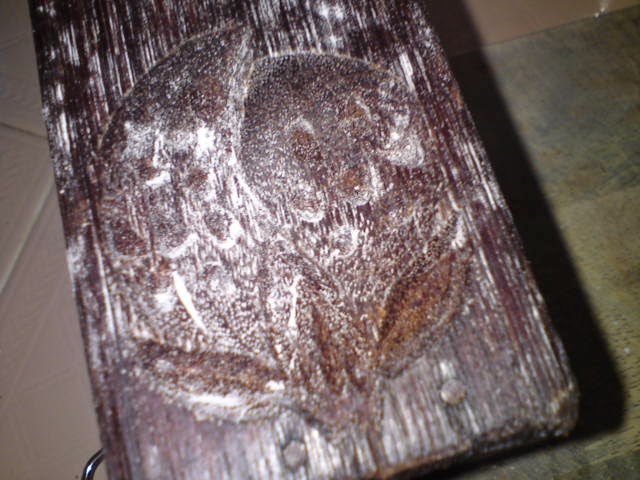 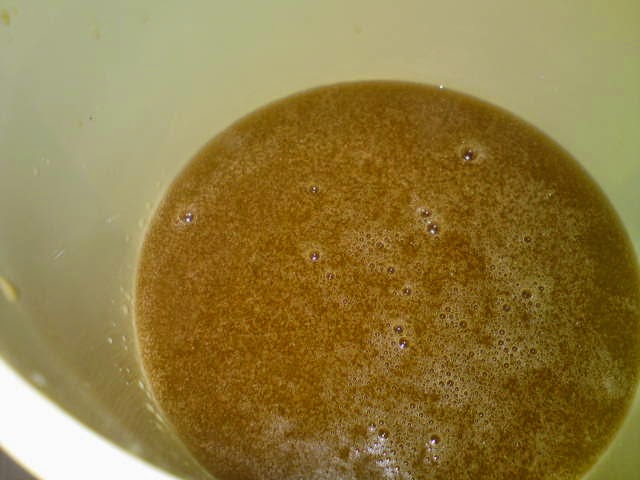 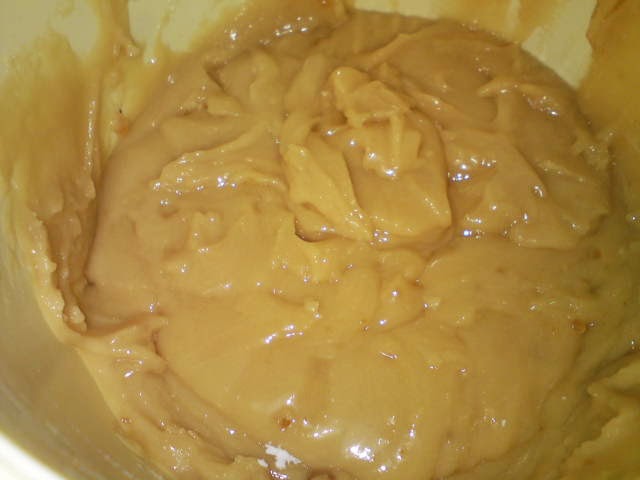 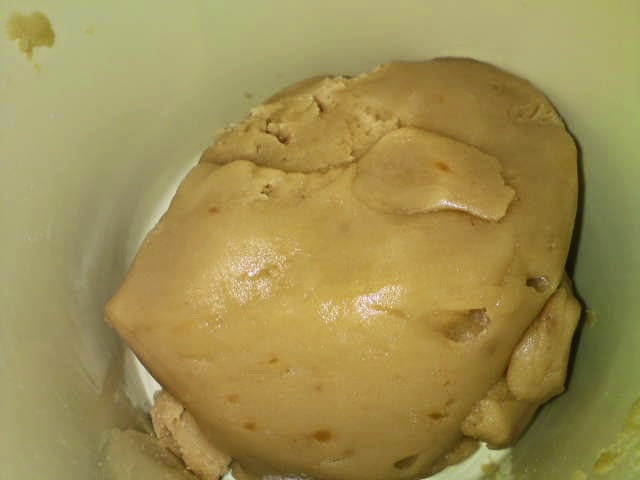 Note:
* Adding milk to the egg yolk makes it less concentrated so that it is easier to apply it on the surface of the mooncake.
* Wait till the mooncakes are cooled before the egg is applied to get a more even coloring.
* Should this mooncake be done correctly, it should be soft, won't stick to your teeth and can be eaten the next day.
* After allowing the mooncake to cool on a metal rack, it can be kept in an air-tight container. It can be kept up to weeks if it is dry enough after baking.

This post is linked to the event, Little Thumbs Up organised by Bake for Happy Kids and My Little Favourite DIY, and hosted by Diana from the Domestic Goddess Wannabe 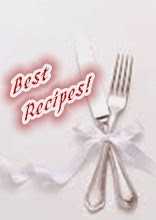 I'm sharing this post  to Best Recipes for Everyone August 2014 Event Theme:Mooncake hosted by Fion of  XuanHom’s Mom
An InLinkz Link-up

Kimmy, this is an interesting 公仔饼which has lotus seed paste added to the dough. With this addition, I think it will surely taste better than the normal 公仔饼.

Hi Kimmy,i wish to have one now,because they look so yummy :)
thanks for linking with Best Recipes^^

Kimmy, this mooncake has a cute shape. I am sure this is good, like all your other mooncakes :)

Hi Cheryl, first time adding thisand I find it more to the sweet side.

Hi Fion, I wish I can share the actual with you too.

Hi Phong Hong, I'm getting old and not 'investing' anymore new designs. There is no successor in my family to 'inherit' these investments. I have to make do with my existing moulds.

This 公仔饼 recipe is really interesting with added lotus seed paste into the dough. Like them in these peaches shapes :D

Hi Zoe, I'm making use of whatever moulds that I have. This one is easily 1/2 century old. Controlling myself not to buy anymore mooncake moulds.

Interesting mooncake... dont think I've ever tried this before.

Hi Baby Sumo, for me anything can try-lah..

Hey Kimmy this is interesting!! I don't think I have ever eaten this. Cute shapes!

Hi Diana, these mooncakes are tasting better and better each day. Not that oily.

hi kimmy, i'm now thinking may start to bake some mooncakes..i've been eyeing on some chocolate mooncake recipe and this one. Hopefully i can try to make a small batch at least..

Hi Lena, there are so many different mooncake recipes. All looks good. I'm keeping some for other times. This portion isn't too much. Can bake in one go if you have a big oven. This year I noticed many are baking doll mooncakes.

just made that few days ago. Thanks kimmy!

Hi Lena, You're welcome.Glad you tried it.

Hi Lena, You're welcome.Glad you tried it.

Hi Kimmy, is there any specific brand of alkaline water that you use and where do you get it from? Thanks.

Hi YN, I always used the normal alkaline water available at grocery stalls but this year I bought a small bottle [size of vanilla essence bottle] cos' I haven't any left. This is more costly. I don't see any difference to the mooncake compared to my past bakes.

Hi Kimmy, I have tried these on Wednesday but when I wanted to take out from my container all of them kinda stick together. I have to kinda peel it off from each other. Hence, most of them got kinda distorted because some of the biscuits came off. I baked at 150C as my oven is hot and I extended 5 more mins. Did I do something wrong? I noticed when it came out from oven, the bottom have some small patches not sure if it is the damp dough. It is not dry enough? Need help here and thanking in advance.